“HRT is smart, but you gotta be honest.”

After repeated calls for the Liver King to admit to steroid use—a claim the offal-gnawing influencer recently revealed to be true —comedian and podcaster Joe Rogan has his eyes on a new target; Dwayne “The Rock” Johnson.

On a recent episode of his podcast The Joe Rogan Experience, Rogan and YouTuber Derek Cole—who broke the Liver King scandal on his “More Plates, More Dates” channel—share their belief that the Black Adam star uses steroids. And that he, and any other mainstream actors who came by their muscles with the help of juicing, should come clean.

In a conversation about Liver King, Rogan asked Cole, “Does The Rock say he’s clean?”

“The Rock should come clean right now,” Rogan says. “He should make a video in response to the Liver King video. ‘I need to talk to you because The Rock’s been lying’” Rogan growls, dropping his voice in an imitation of Johnson’s.

Does The Rock Use Steroids?

That’s the question Rogan wants to get to the bottom of. According to Bleacher Report, Johnson did cop to trying steroids in college in a 2009 interview, but said that’s when it stopped.

Cole pointed to a more recent interview with Men’s Health where The Rock said that “longevity is my priority.”

“Everything [he’s] doing is the hyper-opposite of that, in terms of a diet, a lifestyle,” says Cole. We guess he’s referring to The Rock’s fat-laden cheat day meals. “It’s clearly not longevity focused, it’s clearly ‘how much can I milk this right now with my brand.”

Rogan comments that, based on his physique, The Rock “definitely turned it up a notch at 50.”

“You can’t even get there with HRT [hormone replacement therapy]. That’s not HRT,” Rogan says, pulling up a photo of a bulging-veined Johnson which Cole called “not pro longevity.”

Rogan points out that The Rock is “massive” and his “preposterous physique” is far different than it was when he was 30. “I think you have to be honest, which is why I’m honest about it. I don’t think there’s anything wrong with taking hormone replacement.”

Rogan has spoken openly about his own HRT use. In a 2011 video from The Joe Rogan Experience podcast, he said he went to a hormone replacement therapist every couple of months to bring his hormone levels up to a healthy range.

Rogan says starting HRT was a wise and healthy choice for him. “I started doing it when I was 37, 38, and even then I was just taking the cream. I was taking testosterone cream and right away I was like, ‘Oh my God, I feel so much better.”

Rogan doesn’t mention how he felt before HRT, but if he was testosterone deficient he probably suffered at least some of the most common symptoms of low T (if you’re not familiar with them, we’ve got a whole list of them here.) If you find yourself nodding while reading the list, it might be worth getting your T levels tested, which you can do safely in the comfort and privacy of your own home with Hone’s at-home assessment. 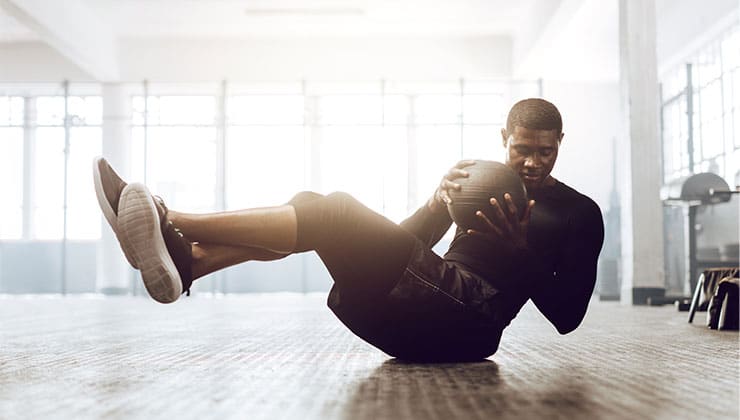 Wondering If You Qualify for TRT?

Let’s find out. Complete our test in minutes, without leaving your couch.

Rogan Doesn’t Think Johnson is the Only Celeb on Steroids

While talk about The Rock’s potential steroid use kicked off the conversation, he’s not the only A-lister Rogan suspects might be using gear. He said that Thor star Chris Hemsworth and Wolverine himself Hugh Jackman should be asked “point blank” if they have taken any enhancements to build their superhero bodies.

Every time an interviewer talks to a movie star, like Hemsworth or Jackman, after they got super jacked, they don’t press them and “let them off the hook every time,” Rogan says.

Rogan praised actor Mickey Rourke for verbally winking to his steroid use for The Wrestler. According to Deadspin, in an interview with the New York Daily News, when asked if he took steroids for his role in the 2009 film, Rourke said: “When I’m a wrestler, I behave like a wrestler.”

Why Rogan Cares if The Rock is on Steroids

Rogan and Cole say what they’re looking for is for celebrities to come clean about using steroids, if they use them.

“There’s definitely an argument to be made that when you have such an impressionable and massive audience that if you say ‘this is what it took to get here’ it very much could influence the trajectory of certain younger men,” added Cole.

So where does this go from here? Well, Rock, it’s your move.

THE TRUTH ABOUT LOW T

Inflammaging Is as Hellish as It Sounds. Here’s How to Combat It

What Are Normal Testosterone Levels By Age?

Why You Keep Waking Up Drenched—and How to Fix It

Why You Can’t Get And Keep An Erection