Home Health Rapamycin: Does the Easter Island Drug Hold the Key to Longevity?

Rapamycin: Does the Easter Island Drug Hold the Key to Longevity?

Ask most men if they’d like to live longer, and they may say yes—but only if they can stay healthy. That’s fair: A long lifespan may isn’t nearly as enviable as a long healthspan. No guy wants to spend his last years frail and plagued by disease.

Adopting science-backed lifestyle changes—don’t eat too much junk or drink too much booze, exercise regularly, get enough sleep—are solid ways to add healthier years. But if you’re already ticking those boxes, there’s an almost-endless list of medications and supplements that claim to support healthy aging.

One that’s currently getting a lot of buzz is rapamycin (also known as sirolimus and Rapamune), a prescription drug approved by the FDA to treat certain types of cancers as well as prevent organ rejection.

In much smaller doses than typically prescribed for organ rejection or cancer, rapamycin has become the darling of biohackers and longevity experts who want to live longer and healthier. Podcasters Tim Ferriss and Peter Attia have done episodes about the drug. Attia takes it, has prescribed it off-label for his patients and, during one interview, called it “hands down the most important and exciting and promising neuroprotective molecule.”

The r/rapamycin subreddit has more than 1.3K members, while on Twitter, the #Rapamycin hashtag contains story after story of people experimenting with various doses of the drug and documenting the effects.

But is it, you know, legit? Or does taking rapamycin rank up there with icing your balls as a biohack you can skip? Let’s explore.

In 1966 a medical expedition from Canada’s McGill University headed to Easter Island. Microbiologist Georges Nogrady collected soil samples that he sent these back to Canada where Dr. Suren Sehgal analyzed them in search of new antibiotics from natural sources.

Sehgal isolated a bacterial species that produced a molecule with antifungal and antiproliferative activity. After many years of testing, it was approved by the FDA in 1999 as an immunosuppressant, useful in helping to prevent organ transplant rejection

Sehgal was diagnosed with terminal colon cancer in 1998. When the cancer spread to his liver, he started taking rapamycin as an experiment to see if the medication could help with his cancer. His cancer eventually became undetectable.

“It wasn’t until he stopped taking rapamycin almost five years later to prove it was because of the medication that the cancer came back and ultimately took his life,” says Jack Jeng, M.D., chief medical officer at Hone Health.

Rapamycin at a Glance

How Does Rapamycin Work?

Jack Jeng, M.D., chief medical officer at Hone Health explains that more research is needed, but rapamycin may be effective at preventing or treating cancer cells by inhibiting abnormal cells and blood vessels from growing and even causing tumor cell death.

Rapamycin may mimic calorie restriction and primarily works by inhibiting a protein kinase called mTOR. mTOR is needed to send signals to cells affecting growth, metabolism, and autophagy—how the body clears out old, damaged cell components like proteins, he says.

Though mTOR role in signaling is complex, it helps to think of the protein as a general contractor on a construction project, says Jeng.

“The general contractor takes in all the signals, like how much money there is or if it’s the right time to install the pipes, and directs the workers on what to do,” Jeng says. “mTOR does something similar.”

“During hard times, a general contractor might realize that there are no new materials coming in and direct the workers to start fixing things up by clearing out the trash and recycling what is available. Similarly, if there aren’t enough nutrients or resources in the cell, mTOR shuts down cellular growth and encourages autophagy to clear out and recycle the cell components that are no longer needed,” says Jeng.

“This is similar to what a cell does during autophagy,” says Jeng. “Basically, the cell is recycling the garbage that’s no longer needed.”

When mTOR’s signaling is over activated, however, cellular processes may not work as effectively, he says. In this case, mTOR functions like a contractor who has too much work coming in, as well as too much stress to think clearly. Housekeeping tasks – like keeping the construction site clear of debris – get deprioritized. Accidents happen.

It’s the same in your cells; only, in this case, accidents show up in the form of abnormal cell growth (cancer) and inflammation (which leads to many other diseases), says Jeng.

In high doses — used as a prescription — Rapamycin suppresses the immune system. That’s how it helps to stop the body from rejecting a transplanted organ. It’s thought that, in much lower doses, it counters immune-system triggered chronic inflammation that ages all of the cells and tissues in the body.

Rapamycin has gained traction as an anti-aging drug because in some animal studies—for example, those done on yeast, worms, flies, rodents, and dogs—indicate the drug might extend life. In one mouse experiment, the drug added an average two months of life. Given that 9 mice days roughly translates to 1 human year, rapamycin holds the potential to increase human lifespan by an average 6.5 years. That’s a lot.

That said, it’s still a little too early to know whether the benefits found in animals will actually translate to humans, and research done on people is scant at best.

One study found that the drug enhanced the response to the flu vaccine by about 20 percent. Another study found that people who took rapamycin for six weeks experienced fewer infections over a year’s time, compared to the placebo group

One clinical trial is currently looking into whether the drug might improve cardiac function;  another is looking at the safety and efficacy in reducing measures of aging in older adults, such as changes in visceral fat.

“If you look at the promising data published on rapamycin so far, I am very optimistic that the medication can improve longevity,” says Jeng. “We still need more studies, however, to understand the right treatment regimen to provide the most benefit with the least amount of risk.” 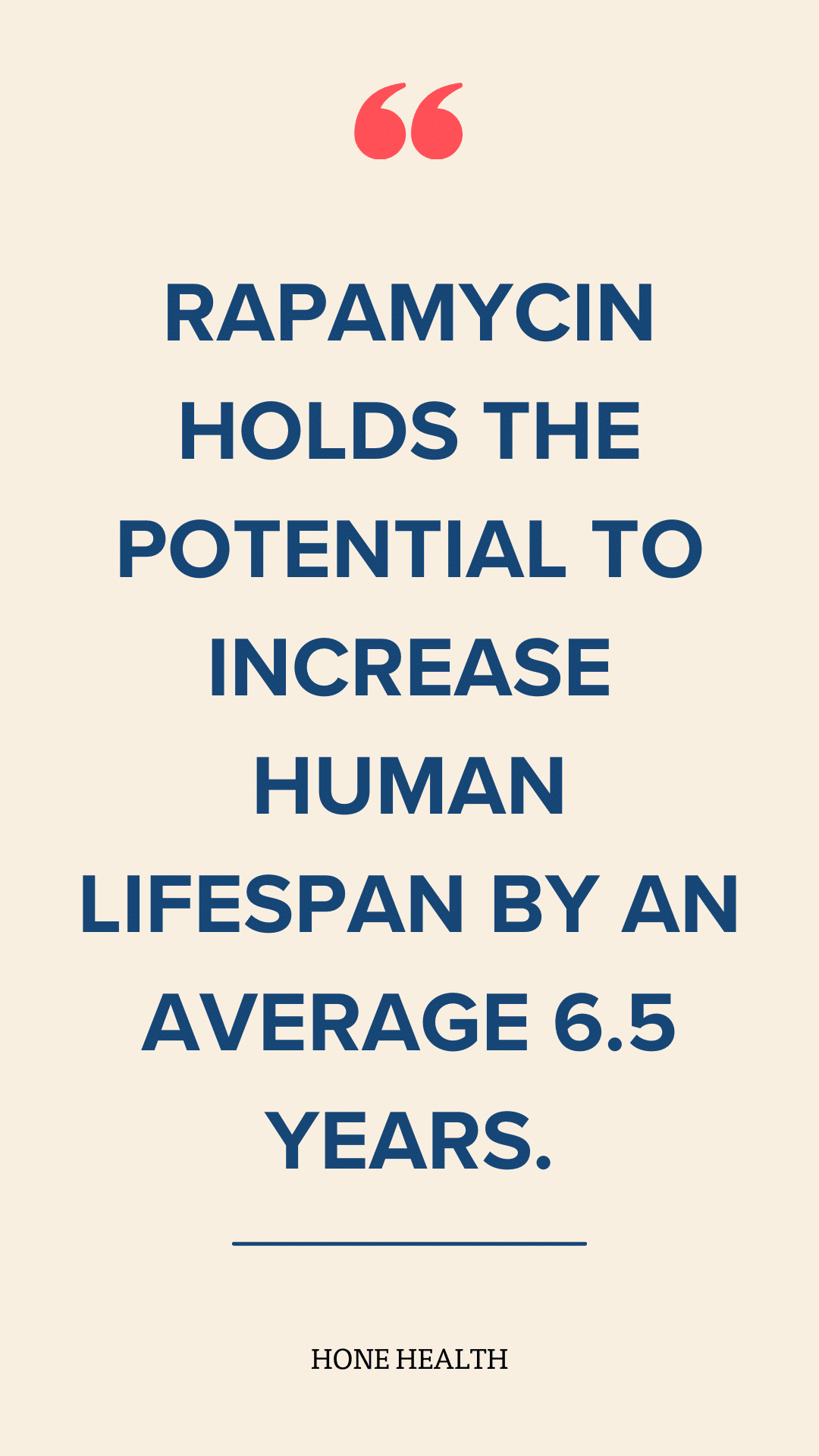 Clinical studies for rapamycin in organ transplant participants showed a range of adverse reactions, including infections, high blood pressure, elevated cholesterol and trigylceride levels, and blood platelet deficiency, among others.

These side effects, however, are likely dose dependent. At much lower doses, rapamycin may indeed be safer, with fewer downsides.

Should You Try Rapamycin for Anti Aging?

Though some doctors are already prescribing rapamycin for anti-aging, Jeng cautions that more research is needed.

“I don’t think we’re at the stage where people should be taking rapamycin for longevity purposes only,” he says. “There’s still too much we don’t know about the medication.”

“Once we have this information, we will be able to start determining if the benefits outweigh the risks for a specific treatment regimen,” Jeng says. “Studies in humans will literally take a lifetime, which is why most of the data available today is in animals. Given the number of scientists and doctors studying the compound I expect we will know within our lifetime how to best use Rapamycin for maximizing longevity.”

These Celebrity Backed Waters May be the Key to Living Longer