Like a well-aged whiskey, a maturing penis isn’t a bad thing. Even if you don’t want to crank out kids in your 60’s a la Alec Baldwin, it’s reassuring to know that plenty of guys still get hard into their sixth decade and beyond.

But like the rest of your body, your junk is in the hands of Father Time. And with every passing year, the idea of an “old man penis” looms.

As you get older, your penis may curve, shrink, or change color. You might need more stimulation to get aroused.

Some age-related changes to your junk—like graying pubes—are simply a matter of aesthetics. Others, like shrinkage and an increased cancer risk can be avoided or kept at bay by following healthy habits like following a clean diet and adopting resistance training, says urologist Wagner Baptiste, M.D.

Here, Baptiste explains the most common age-related penis changes and what to do if you spot them.

The main culprit of a curved shaft is Peyronie’s disease, a build-up of plaque and scar tissue that causes your penis to be rigid and curved—even when it’s flaccid.

Approximately 1-13 in 100 men will develop the condition, which usually strikes men in their 50’s, says Baptiste.

“Typically the curve is upwards, but it can curve to the right, left or down depending on how much plaque builds up and the way the tissue forms around it,” Baptiste says.

Some men are predisposed to Peyronie’s, but doctors don’t know the exact genes involved, Baptiste says, so most men aren’t diagnosed until symptoms occur.

The biggest cause of Peyronie’s is acute trauma and repetitive microvascular trauma (such as during certain sexual positions) where your penis could buckle (best to avoid “the helicopter” and “the pogo stick” then).

An injury to your tunica albuginea—the connective tissue that surrounds your penis—can cause your tissue to curve and allow plaque to build and set the curve in place, says Baptiste.

The same can happen with sports injuries, although they’re more rare, he says.

For some men, Peyronie’s causes painful erections and makes sex uncomfortable. Other men are merely bothered by the way it looks.

“If curvature is less than 30 degrees, it is unlikely to cause symptoms other than the curve,” says Baptiste. Surgery is a fix to correct the curve either by plicating the tunica on the opposite side of the curve or by removing the plaque when the curvature is troublesome. “If you operate before the full extent of plaque has formed, plaque can return and rebuild.”

2. There May be Shrinkage

The old ‘use it or lose it’ adage? It fits here. If you have fewer erections as you age—around 20 to 30 percent of men do, says Baptiste—the tissue that keeps your penis erect loses its elasticity, which translates to less length.

Dr. Baptiste says the shrink varies in length widely based on the individual.

Smoking, a lack of exercise, and health conditions like diabetes, high blood pressure or erectile dysfunction can also cause age-related penis shrinkage, says Baptiste. “They erode your elastic tissue which allows your blood vessels to expand and collapse, necessary for more blood flow and better erections,” he says.

Some men are also led to believe their penis has shrunk, when in reality, they’ve stayed the same. Obesity doesn’t cause shrinkage, but excess abdominal fat can give the impression of a smaller shaft.

Depending on the degree of the curvature, your sex life may not suffer, Baptiste says. If you can penetrate your partner—and thrust in and thrust out just fine without causing pain to your partner or yourself—your partner won’t feel a difference and most men are actually fine with their length, says Baptiste.

“When length starts to affect penetration because you’re not having or can’t get an erection, then you move into the category of erectile dysfunction,” Baptiste says.

The fix in this case depends on the cause. “If you have diabetes, have that in check, if you’re a smoker, quit,” says Baptiste. If you suffer from erectile dysfunction (more on this below), medications like tadalafil, sildenafil, and testosterone replacement therapy (TRT) can help.

ED is treatable and curable. If lifestyle swaps don’t bring relief, talk to your doctor. Medications called PDE5 inhibitors can increase blood flow to your penis and offer more firm erections, while TRT is shown to improve erectile function in men with ED with low T (1). 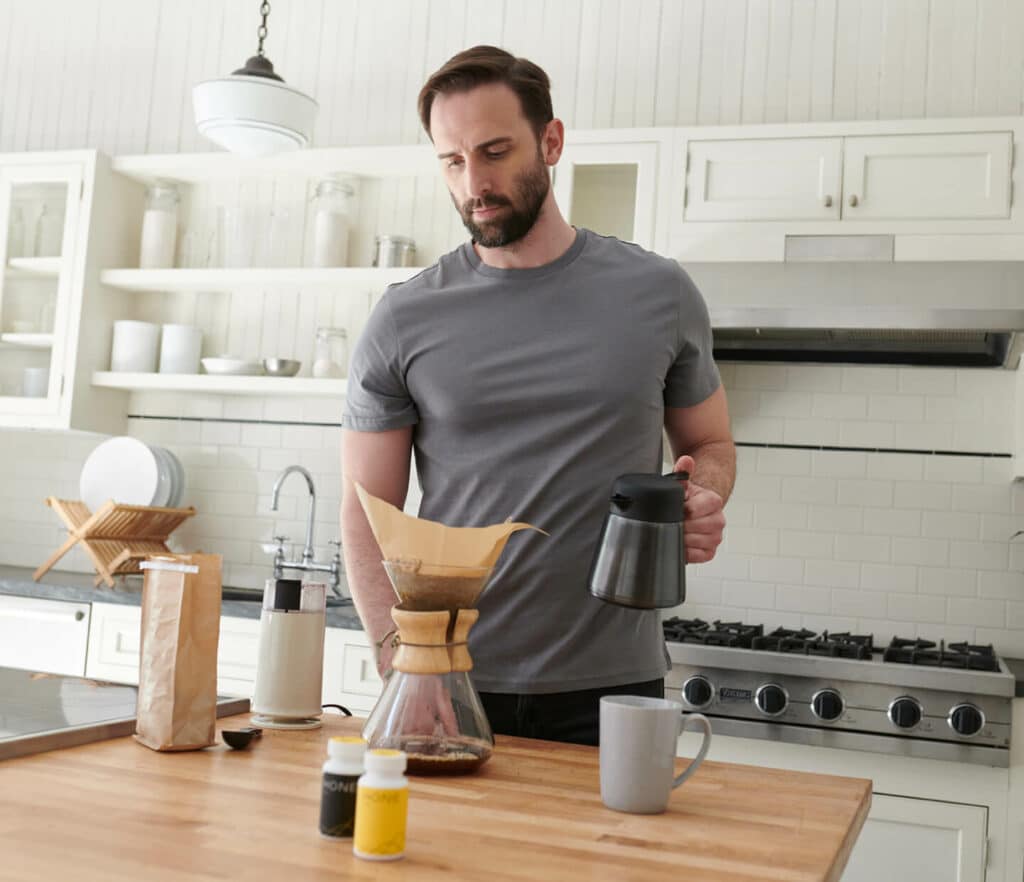 Checking your T levels is easy with Hone’s at-home assessment. You can knock it out before your AM coffee.

If you have low T, our physicians can help you feel better.

The shift might not be drastic, but your penis can get lighter with age.

If blood flow to your penis is restricted because of atherosclerosis—arterial hardening that’s common with age—it might appear lighter than it used to. You may also notice other symptoms including a faint pulse in your legs and your legs may appear darker, says Baptiste.

If atherosclerosis is at play, your doctor can treat it with medications to lower cholesterol and blood pressure, or with aspirin.

A change in color is also often one of the first signs of penile cancer (more on this below), which is more common in men over 50. This color change is more isolated around the head of your penis or foreskin as opposed to your entire shaft.

Testicle shrinkage varies based on the cause, but it can be eyeballed by your doctor or more accurately measured with an orchidometer, Baptiste says.

Your testes contain germ cells which produce sperm and Leydig cells, which are responsible for testosterone production. If you lose one or both of these cell types—which can be caused by a hormonal change or injury—your balls atrophy, or shrink.

Testosterone replacement therapy is a viable option to get your T levels back to normal and curb symptoms like fatigue and weight gain. But—warning—it could further shrink your balls.

“One potential side effect in some men on TRT is testicular atrophy,” says Baptiste. When you start TRT, your body tones down its natural testosterone production, which leads to less LH and FSH and atrophy.

If you’re concerned about this, ask your doctor about human chorionic gonadotropin (HCG). Prescribed alongside TRT it can help prevent atrophy, says Baptiste.

Hair follicles—both the ones on your head and the ones around your member—get their color from melanin. As you age, they produce less of the pigment, and your hair turns gray.

The rate of graying is largely genetic. If you’re really bothered by the color change, you can dye your hair but pick a product formulated for pubic hair, which is coarser than the hair on your head. A light breeze would get you hard at 18, but as you age, the nerves responsible for sending arousal messages from your big brain to your little one weaken, Baptiste says.

As a result it might take more stimulation for you to get an erection.

The risk for penile cancer starts to creep up around your 50th birthday, Baptiste says. Still, it’s rare: Only around 2,000 new cases are diagnosed in the U.S. each year, most of them in uncircumcised men, smokers, and men with chronic inflammatory disorders like HPV.

The most common symptom: skin changes, or small growth on the penis. You may develop small, dark bumps, open sores, or notice changes in skin texture. As soon as you notice these changes, make an appointment with a urologist to get a biopsy for the right diagnosis, says Baptiste.

The key to surviving penile cancer is catching it early. Early stage penile cancer can be treated with topical medications. If it’s at an advanced stage at diagnosis, you might need a penectomy (removing part of the penis) and lymph nodes in your groin.

Wash yourself properly at least once a day to remove smegma—secretions under your foreskin that doctors believe have carcinogens—which can inflame your penis and increase your cancer risk.

Your junk will age with the rest of your body. While some of these changes affect aesthetics, including penile shrinkage and a change in color, others like erectile dysfunction and testicular shrinkage can be delayed or kept from being worse with the right lifestyle habits.

BDE Comes Naturally to Pete Davidson and These 16 Celebrities

Nitric Oxide May Be the Secret to Better Erections. Here’s How to Get More

The Skin on Your Penis is Dry. Here’s How to Fix It.

The One Thing You Need For Better Erections